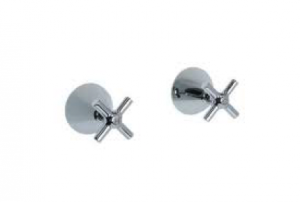 Old, worn-out shower taps may be leaking inside the wall! It’s true. Because they sit on tiles in your shower, bath or laundry wall, seeing those drips and leaks is almost impossible until you see mould or flaking paint in the adjacent room, or start remodelling the house ripping old tiles.

Your shower, bath or laundry taps should operate smoothly. If you have to strain to turn the tap on/off, chances are it’s time to get them replaced.

Maybe you still have those old plastic ones with cracks in them and swapping them for chrome ones would increase the eye appeal in your laundry.

You will get two shiny shower taps with wall top assembly – fitted.

We will shut down the water supply to house or home unit to carry out the installation.

BOOK NOW to secure the time slot that is convenient for you.